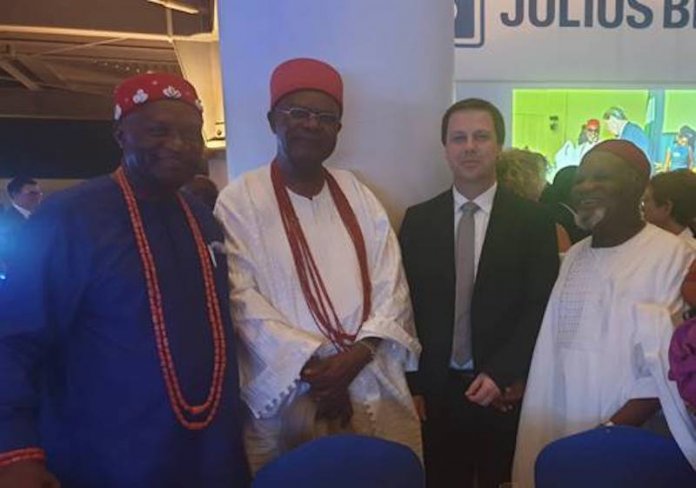 Two of Julius Berger’s longest serving members of its Board of Directors, His Royal Highness Igwe Peter Nosike Anugwu and Engr. Heinz Stockhausen have retired from the Board of the company.

A statement by Julius Berger said at a send forth party in honour of the retiring boardroom veterans, which held at the penthouse of the iconic head office of Nigeria’s most successful and exemplary engineering construction company in Utako district of the nation’s capital city Abuja, it was an occasion for a well-deserved celebration of the two great men whose work and tireless dedication to the development and growth of the company’s business and brand could not just be swept under the carpet.

To set the lively tone for the event, the Chairman of the Board of Directors of Julius Berger, Mr Mutiu Sunmonu, CON, said even though it was within the power of both corporate gurus to elect to retire and rest after such long, worthy and productive service to the company, he personally would have wished to still have them with him as the reliable boardroom juggernauts as he has come to know and appreciate them. That Julius Berger would experience a nostalgia for the retiring gentlemen was palpable as Mr Sunmonu continued his speech. He urged both men to kindly answer if and when Julius Berger calls to draw from their pool of worthy experience in the continuing progressive interest of the company.

The Vice-Chairman and former Managing Director of Julius Berger, Dr. George Marks, a most competent commentator on the company’s business in Nigeria, also took time to eulogise the virtues and friutful contributions of both Igwe Anugwu and Engr. Stockhausen to the growth and success of the company. Dr. Marks glowingly celebrated that Engr. Stockhausen was also so historically operationally involved in Julius Berger projects that his competent and remarkable signature of technical expertise, experience and strength remains enduringly visible in almost every major engineering infrastructure in Abuja and all across Nigeria. Such projects include but are not limited to the International Conference Centre Abuja which had construction time of nine months; a bridge to Minna in 6 weeks; infrastructure and buildings in Abuja such as the Central Bank and later on the Central Bank in Lagos; the landmark lkoyi bridge in Lagos; the Bonny LNG Trains 1 – 6; and last but not the least the wonderful Nestoil Tower in Victoria Island Lagos.

Marks thanked both HRH Igwe and Engr. Stockhausen for their unparalled dedication to duty, wishing them an enjoyable retirement. Marks also heartily appreciated and thanked the spouses and families of the retiring directors for their great understanding and perseverance by which they allowed their husbands to work so very productively for Julius Berger during their decades of service to the company.

The Managing Director of Julius Berger, Engr. Dr. Lars Richter, also gave remarks at the event in appreciation of the retiring directors. He thanked them for their great work and legacy of productivity that advanced the business fortunes and frontiers of the company. Engr. Dr. Richter also wished both HRH Igwe and Engr. Stockhausen a happy retirement. Other speakers at the event included the immediate past Managing Director of the company, Engr. Wolfgang Goetsch, and members of the Board Hon. Engr. Jafaru Damulak and Dr. Ernest Nnaemeka Azudialu-Obiejesi, all of whom paid glowing tributes to the transformative contributions of HRH Igwe and Engr. Stockhausen to the great Julius Berger corporate success story as it is today.

The retiring directors, HRH Igwe Anugwu and Engr. Stockhausen in responding to the tributes also thanked the company for the opportunity given to them to serve Julius Berger. Igwe served and became the oldest independent director on the Board before his retirement. He was notable, long-serving member of the company’s audit committee and a very dignified face with a consistent and respected presence at the company’s annual general meetings. HRH Igwe, in a lighter and gracious banter said: “I am still available to offer good advice to the Audit Committee of our company anytime you require me to do so even in retirement.”