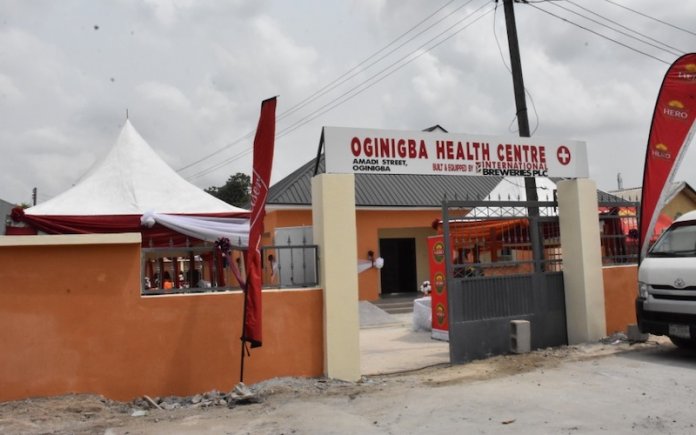 Ernest Chinwo in Port Harcourt
International Breweries Plc has inaugurated a N44 million Primary Health Care Centre in its host community, Oginigba, Port Harcourt, Rivers State as a demonstration of its commitment to supporting government and communities in healthcare and infrastructure delivery.

International Breweries Plc, a member of one of the world’s largest brewer, Anheuser-BuschInbev (AB InBev), said it invested N44 million to build, furnish and equip the health centre which will be subsequently managed by the Rivers State Primary Health care Management Board.

The inauguration ceremony, which held at the Oginigba Primary School had in attendance dignitaries and representatives from the state government, International Breweries Plc., the local government council, the Primary Health Care Management board, the host community and neighbouring communities.

In his speech, the company’s Legal and Corporate Affairs Director, Otunba Micheal Daramola, said the inauguration was yet another testament to International Breweries Plc’s commitment to an effective and efficient Corporate Social Responsibility (CSR) system.

He noted that the dream of bringing people together for a better world as espoused by the company drives the vision to support communities and the people of Nigeria in five CSR interventions areas: Empowerment, Education, Health, Infrastructural support and Responsible drinking.

“The dream of bringing people together for a better world actually led to our vision of supporting the Rivers State government to provide this primary health care facility in Oginigba to cater for the people of the community and environs.

“With today’s project, we are also demonstrating our contributions to the United Nations Sustainable Development Goals: SDG 3 on Good Health and Well Being; SDG 6 on Clean Water & Sanitation and SDG 9 which addresses the impact of Industry, Innovation and Infrastructure’’.

Daramola further hinted that aside the health centre, the company also has its footprints in other areas of development in the state.
“Before this project, we renovated the Oginigba primary School borehole which currently provides potable water to pupils, teachers and the community residents. We are also supporting youth empowerment and employment as eight youth beneficiaries from Rivers State would be receiving a total sum of N7, 970,000 as grants from the International Breweries Foundation under the Kickstart Youth Empowerment programme to start their businesses”.

Continuing, Daramola said the company is also driving responsible drinking and sensitisation campaigns in partnership with the Federal Road Safety Corps (FRSC) to stem the menace of underage and binge drinking in communities and among consumers in Port Harcourt.
He stated that the company had carried out CSR projects in Esa Odo and Omi-Asoro communities in Osun State and also in Ilashe community in Sagamu, Ogun State.

Rivers State Governor, Nyesom Wike, in his speech, commended International Breweries Plc for responding swiftly to the medical need of the community after the state government provided the site and location of the health centre.

Wike, who was represented by the state Commissioner for Education, Prof. Kaniye Ebeku, gave the assurance that government would continue to provide the enabling environment to support the business operations of corporations that are complementing the state government’s efforts at improving the lives of its citizens.

The Paramount Ruler of Oginigba Community, Eze Gershon Odum, said the intervention recorded by International Breweries Plc with the Oginigba Health Centre would serve as an example for other multinational companies in the community to emulate.
“We are indeed overwhelmed with joy to witness the completion of this ultra-modern health centre, a project embarked upon and successfully completed by