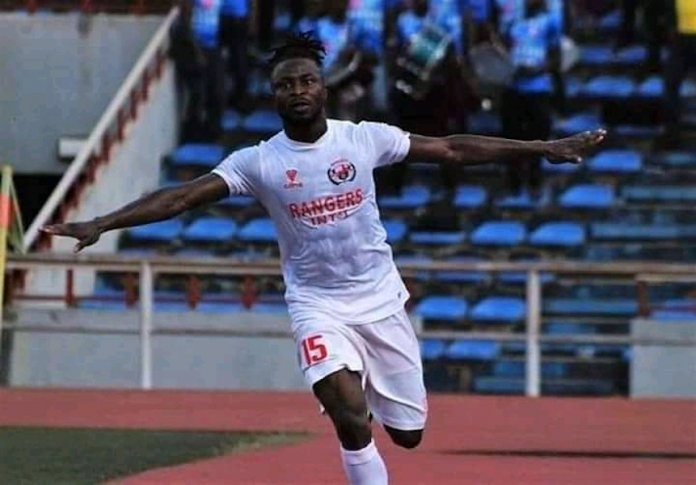 Rangers International FC of Enugu striker, Ifeanyi George, 26, was killed in an auto crash at Abudu, on the Onitsha Agbor-Benin road Sunday morning.

According to a tweet from Rangers yesterday morning, George and two other footballers were heading for Lagos before their car ran into a stationary articulated vehicle.

This the third Nigerian footballer to die in the last one month after Remo Stars’ Tiamiyu Kazeem and Chineme Martins of Nasarawa United died prematurely.

While Kazeem died from injuries sustained from a hit and run vehicle after he was alleged to have been pushed out of a moving police van, Martins slumped and died from cardiac arrest during his club’s home game against Katsina United.

George was on his way to Lagos with the other players for the ten-day break approved by the management of the Flying Antelopes following the suspension of the Nigeria Professional Football League as a result of the outbreak of the Coronavirus pandemic.

Meanwhile, Chairman of the League Management Company (LMC), Shehu Dikko has expressed shock at the accident involving some players of Rangers International on Sunday morningwhich led to the death of their striker and CHAN Eagles International, Ifeanyi George.

Dikko who contacted the club Management on getting the report of the accident, commiserated with the Club Management, team members and fans of the Enugu based club as well as the players immediate family.

“We sympathise with the club at this trying time and pray for the repose of his soul and wish the injured ones a speedy recovery”, the LMC Chairman told the club’s team manager, Amobi Ezeaku and coach, Salisu Yusuf in the phone call.

Similarly, the management of Rivers United FC have commiserated with Enugu Rangers over the death of George.

Speaking on behalf of the club, General Manager, Okey Kpalukwu, expressed shock and sadness at the news while also sending the Rangers family the heartfelt concern and condolences from the Rivers United family.

“We are in shock and pain at the shocking news of George’s painful demise and our thoughts and prayers are with the Rangers family at this very sad moment,” Kpalukwu said to Pride of Rivers State’s official website.