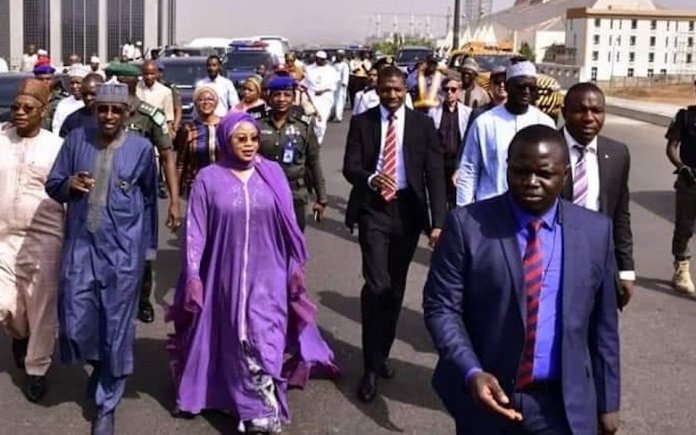 The substantial completion of the Southern Parkway and the enforcement of one-way traffic flow in Abuja will restore the city’s masterplan and ease traffic, writes Olawale Ajimotokan

The Southern Parkway is described as one of its kind in Africa. The four-track road that traverses the Central Business District of the FCT is unique to Nigeria having been adapted from Brasilia, the capital of Brazil.

It is designed to complement the Northern Parkway, the major arterial known as Sani Abacha Road that runs across Mabushi and terminates at Life Camp.

The 21 Km long road forms the major spine of Abuja and is considered one of the longest roads in the city linking all the four phases of the city centre with facilities including underpasses, spurs, street lights, cafe centres and recreational spots to mention a few.

Those who consider this road as the cultural spine of the city are not far from the truth in their estimation. The major places of worship, including the Christian Centre, the National Mosque, the uncompleted Millennium Tower and Cultural Centre, the Nigeria Television Authority and Silver Bird Entertainment Centre and the National Archives are all within the vicinity of the road.

FCT Minister Mohammed Musa Bello, recently opened the completed portions of the Southern Parkway to traffic and restored one-way traffic on the road as envisaged in the Abuja masterplan.

The enforcement of the one-way rule will substantially ease traffic snarls usually noticed on spots like Samuel Ademulegun Road, Central Mosques and Yar’ Adua Centre, when motorists aim to link up with traffic during the peak hours.

Bello congratulated the Executive Secretary, Federal Capital Development Authority (FCDA) Umar Gambo Jibrin and the team of Nigerian engineers for their part in delivering the project awarded to Setraco in December 2010.

The minister noted that enormous amount of time and resources had been deployed into the project, saying that without completing the project, the northern and southern sectors of Abuja would not be connected.

He highlighted the importance of the project, which he said underscores the cardinal principle of President Muhammadu Buhari’s administration, which is infrastructure, noting that at the rate the country is growing, its economy will be haunted if there is no substantial investment in major infrastructure.

“I am so pleased to say that the partnership between the FCDA and Setraco Nigeria Limited has been very beneficial to the city. I am sure all of you know that the twin bridges (across Goodluck Jonathan Expressway) were concluded about the same time and you can see how these bridges were able to link the north and the southern part of the city. That is the whole idea. More importantly, very shortly, we are going to open the interchange that links the Goodluck Jonathan Expressway with the Inner Southern Expressway.

“In the last few years, the FCT Administration has spent a lot of time, trying to make sure that major arterial roads within the city are completed. I am very pleased to say that most of them have reached a level of completion where we think we can now open them up to the public.

“But more importantly, the infrastructure in Abuja is second to none in Africa. So, as an administration, we are basically emphasising three things. One, we have to complete these projects. Secondly, we are working on a very robust system of maintenance of these projects. But, sadly, which is the most difficult and that cannot be done without the support of the residents of Abuja. So, we have to use these roads the way they were meant to be,” Bello said.

According to him, beside the southern and northern parts of Abuja, the First Ring Road, Nnamdi Azikiwe Express Road, Kabusa, Garki, the Central Business District, Mabushi, Life Camp and Gwarimpa will be interconnected upon the completion of the road.

The minister noted that two key bridges that traverse the road, one across Muhammadu Buhari Road and the second over Funmilayo Ransome- Kuti Road are also nearing completion.

While the connection into Muhammadu Buhari Road will substantially ease traffic into Garki, the bridge across Funmilayo Ransome-Kuti Road only requires a barrier and will eventually connect the traffic that goes to Area 3.

While speaking at the opening of Southern Parkway, the Acting Managing Director Setraco Nigeria Limited, Dr Ray Chaudhuri projected that about N16 billion is required to complete the road.

Chaudhuri said that Setraco had already submitted to the FCDA a certificate for the payment of N2.5 billion for the work so far done.

He assured that the project will be completed by the end of this year hopefully if funds is made available.

Dwelling on enforcement of the one- way rule, Jubrin said that series of conflicts being experienced on the road were occasioned by motorists driving in the wrong directions.

He explained that movement on the Southern Parkway is one directional as the road does not provide for driving in the reverse direction.

Jubrin said officials of the Directorate of Road Traffic Services (DRTS) as well as FCT Transport Secretariat would be deployed to the road ensure compliance, while advising motorists to pay attention to road signs placed on the road as guide.

This position was reinforced by the Chairman of FCT Traffic Management Task Team, Ikharo Attah.

Attah added that in the context of the of the enforcement of rotational traffic on Southern Parkway, motorists emerging from Muhammdu Buhari Way wishing to access the Infrastructure Concession Regulatory Commission (ICRC), Shangaliku Restaurant, FCDA/ FCTA Secretariat and Benue House, will keep to the right hand and turn at the Yar’ Adua Centre and Sheraton Hotel, journeying towards National Mosque, CBN Headquarters, NTA to access Area 8.

He advised motorists to make use of the road signs as DRTS officials will flag down violators for driving against traffic and arraign them before the mobile courts trying such offences.