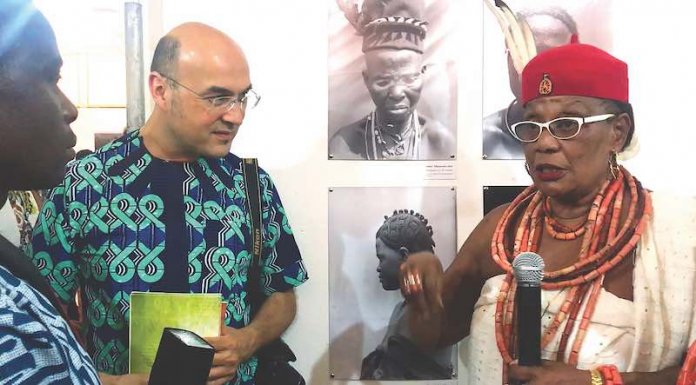 There is much to learn from participants’ interactions and reactions at the “[Re:]Entanglements” project and art exhibition held at the University of Nigeria, Nsukka. Most outstanding of these lessons is its inspiration of a sustainable decolonisation in modern-day practices. Chinyere Odinukwe reports

As part of a three-year research collaboration exploring the post-colonial afterlives of colonial archives, the Nnamdi Azikiwe Library, University of Nigeria, Nsukka recently hosted a remarkable exhibition bringing together contemporary artworks, music, culture and linguistic analysis produced by artists and academics at the institution.

The exhibition, ‘(Re:) Entangled Traditions: Nsukka Experiments with an Anthropological Archive’, was part of the ongoing “Museum Affordances / [Re:]Entanglements” project being led by Professor Paul Basu of the School of Oriental and African Studies (SOAS), University of London. It marked the culmination of a collaboration with the University of Nigeria, Nsukka, coordinated by Dr. George Agbo, Lecturer in the Department of Fine and Applied Arts and also a postdoctoral researcher on the “[Re:]Entanglements” project.

The “[Re:]Entanglements” project is re-engaging with photographs, sound recordings, artefact collections and written notes and publications associated with a series of anthropological surveys undertaken in regions of Nigeria and Sierra Leone between 1909 and 1915. The surveys were made by the first Government Anthropologist to be appointed by the British Colonial Office – a man named Northcote W. Thomas (1868-1936). For over a century these archives and collections have been tucked away in different institutions in the UK, including the University of Cambridge Museum of Archaeology and Anthropology, the British Library, the Royal Anthropological Institute, and the UK National Archives. Through the work of the “[Re:]Entanglements” project, copies of the materials are being brought back to Nigeria and Sierra Leone.

As well as depositing copies of the photographs and sound recordings with the communities Northcote Thomas visited more than a hundred years ago, the “[Re:]Entanglements” project has been exploring other ways of re-engaging with the archives through creative partnerships. The Nsukka exhibition is the third to take place in Nigeria, others have taken place at the National Museum in Lagos and Edo Global Arts Centre in Benin City.

In each collaboration, participating artists and researchers were introduced to the archives through workshops led by Professor Basu and over a number of months developed new creative responses through their various artistic practices. The majority of artists and researchers at Nsukka focused on archival materials relating to Northcote Thomas’s tours in Igbo-speaking areas of Nigeria in 1910-11 and 1912-13.
At a reception prior to the opening of the exhibition, Professor Patrick Okpoko, the Deputy Vice-Chancellor of the University of Nigeria, Nsukka congratulated the “[Re:]Entanglements” project team and its partners in the Department of Fine and Applied Arts and Department of Music on behalf of the Vice-Chancellor. He remarked that the exhibition shared an experimental approach that was in keeping with the underlying vision of the University of Nigeria and the striving for excellence that finds expression in the endeavors of the various disciplines undertaken in the institution.

He further stated that the Department of Fine and Applied Arts, for instance, has been at the forefront of the artistic revolution that began as part of the nationalist struggle in Nigeria in the middle of the twentieth century.
The wider objective of the “[Re:]Entanglements” project is to consider the paradoxical potential of colonial archives and collections to contribute to the decolonization of knowledge. While the photographs, sound recordings, artefacts and reports of Northcote Thomas were originally intended to support the colonial government, a century later they represent an important source of information and inspiration concerning life in West Africa at the beginning of the twentieth century when many pre-colonial cultural practices were still vibrant. At the same time, these materials represent a “difficult history”. As Professor Okpoko noted in his address, the mere mention of colonialism still evokes feelings of apprehension and slavery in some people’s minds. This material needed to be handled with care so as not to reproduce colonial structures of thought and value.

Professor Okpoko further reflected on the continuities and changes apparent when examining the archives left from Northcote Thomas’s anthropological surveys. While some traditional practices such as oja (flute) playing and certain masquerades were easily recognizable, other traditions and locations had changed radically in the intervening 100 years.

The “[Re:]Entanglements” project comes at a time when the return of Nigerian artworks and artefacts in foreign museums is again being debated. Some progress is being made, especially with regard to the proposed new Palace Museum in Benin City. At the same time, many Nigerians have mixed feelings about such returns, possibly due to an awareness that many of the art institutions, galleries, and museums meant to preserve Nigeria’s historical artefacts appear mismanaged and underequipped for the task. And while the debate continues regarding the return of artworks preserved in foreign museums, others are being intentionally destroyed by their own communities at home, regardless of their cultural or historical import.

Such is the wider context that frames the broader “[Re:]Entanglements” project and the “[Re:]Entangled Traditions” exhibition at Nsukka. In particular, the exhibition featured the work of many artists associated with the “Nsukka Art School”, including Chijioke Onuorah, Krydz Ikwuemesi, Chinyere Odinukwe, RitaDoris Edumchieke Ubah, Chukwuemeka Nwigwe, Chika Kanu, Jennifer Ogochukwu Okpoko, Chukwunonso Uzoagba, Ugonna Umeike, and Ngozi Omeje. Each artist experimented with the Northcote Thomas archive in diverse media ranging from paintings in various media, installations, photography, digital art, batik, tapestry, fashion, and mixed media. The artistic expressions were thematically explored in relation to the archives as a creative resource to address societal issues such as identity, religion, culture, politics, intolerance, progression and regression. Other participants in the project included musicologists Ikenna Onwuegbuna and Samson Eze, while Gloria Okeke and Miracle Uzoagba participated as linguists.

Many of the artists made visual reference to the archival images in their work. In her two-panel painting entitled Akwa Nkosa Achalugonwanyi, for example, Chinyere Odinukwe addresses the evolving socio-cultural identity of Igbo attire using the woman wrapper and Uli traditional symbols which have transcended beyond its conventional appearance from the precolonial era to the present day. The painting of a woman from Nibo in Anambra State in 1911 was executed in acrylic and salvaged aluminum foil with a backdrop of Uli traditional motifs.
Chuu Krydz Ikwuemesi further explores uli traditional symbols in a style that appears to be defragmentation of Uli symbols. His work, entitled Playing with Time and Memory, is rendered with acrylic paint on four panels of dominant earth colours in brown, red and yellow on canvas. Some of the Uli body and wall designs photographed by Northcote Thomas also finds a thematic rendition in the tapestry and applique work of Jennifer Okpoko and RitaDoris Ubah.

Chijioke Onuorah in his large-scale batik work entitled Ezeana Obidigbo engages with the ancient ichi facial scarification practice among the Igbo. The thick linear strokes of wax application on the foreground and background of the fabric situate the scarification process of igbu ichi. Though a proud practice in the past, a keen observation of the large drapery mounted in the exhibition hall is a reminder of how facial scarification is perceived as abuse in modern Nigeria.

Furthermore, the art exhibition ushered in art patriots and enthusiasts with Ikenna Onwuegbuna’s and Samson Eze’s modernized renditions of Northcote Thomas’s historical sound recordings of traditional music, which provided a soundtrack to the exhibition. The recordings derived from some Igbo communities between 1910 and 1913 have been recomposed by Onwuegbuna and Eze from an ethnomusicological perspective. The sound of oja, ekwe, and udu amongst other traditional Igbo instruments filled the exhibition space as students of the Music Department also performed different cultural dances at the exhibition opening.

On panels at the center of the exhibition hall, the linguistic interpretations of Gloria Okeke and Miracle Uzoagba were on display. Using Northcote Thomas’s historical recordings of Awka dialects, they examine how the spoken Igbo language has changed over a hundred years.
The “[Re:]Entangled Traditions” exhibition also attracted the presence of traditional rulers such as the Igwe of Nkwere Nsukka Ancient Kingdom, HRM, Patrick Okolo Chukwunweze and the Omu Anioma of Delta, HRM, Obi Martha Dunkwu, who declared the exhibition open.

In her own experience with the “[Re:]Entanglements” project, Omu Anioma, HRM Dunkwu revealed that the visit of the project researchers to Okpanam was a saving grace to her traditional stool and kingdom at a time when her position as Omu Anioma was challenged by her male counterparts. Thus while she was in court to defend her throne, a single photograph shown to her by George Agbo that identified the Omu of Okpanam, snapped by Northcote Thomas in September 1912 was enough evidence for the court to resolve the case in her favour.
This can be seen against the backdrop of the challenges women face in leadership in a culture where the males remain dominant in traditional settings while the women are expected to be perpetually submissive to them. In this example, it can be seen how through the project’s fieldwork activities, these historical photographs, taken in the context of colonial oppression, can intervene in contemporary politics and produce a positive impact, not least in resolving conflict in some communities.

A selection of works from the Nsukka exhibition, along with work displayed in Lagos, Benin City and Freetown, Sierra Leone, will be displayed in a major two-month exhibition at SOAS’s Brunei Gallery in Central London in October to December 2020. This will also be an opportunity to see some of the original archives and artefacts assembled by Northcote Thomas, as well as other creative works on film and video.

The “[Re:]Entangled Traditions” exhibition reminds us of the importance of art and archives, and of history, culture, and creativity in contemporary society. Our current system of government pays little attention to the safeguarding and promotion of art and culture, leaving creative professionals and researchers at the mercy of privately-owned institutions and fraudsters. These inadequacies on the part of the government incline Nigeria’s art, culture, and history towards extinction, cutting the present and future generations off from the source of their identity, rendering them homeless.

The “[Re:]Entanglements” project and art exhibition is a revelation. There is much to learn from participants’ interactions and reactions to this colonial archive, both creatively and interpersonally. Most outstanding are the lessons it provides for conceiving of sustainable decolonization in modern-day practices. Paradoxically, the documentation of Nigerian history and culture produced through this century-old colonial anthropological survey can help us reimagine the future, grounded in our own culture and traditions, rather than that built on the legacies of colonial misgovernance.
More information about the project may be found at https://re-entanglements.net.
––Odinukwe writes from Nsukka