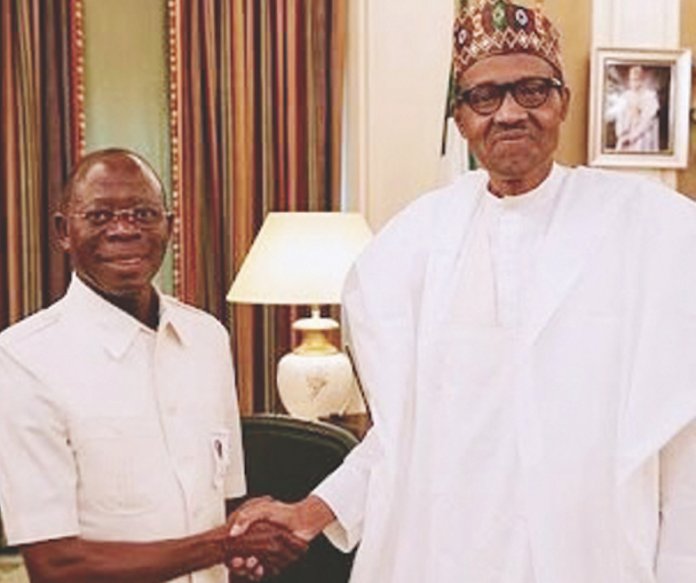 It might be trite to say President Muhammadu Buhari did not show leadership by waiting till the eleventh hour before intervening in the crisis plaguing the APC, writes Chuks Okocha

The manner of interventions in issues of national importance by President Muhammadu Buhari always smacks of insensitivity to say the least. His eleventh hour intervention in the recent crisis in the All Progressives Congress (APC) is not the best, when all state’s resources and institutions had been stressed to their limits. The President’s intervention, unfortunately, is causing disrepute to the reputation and integrity of the judiciary and other law enforcement agencies in the country.

This is not the best and it is not to say that the President was not aware of the situations at the budding stages. Even when the national chairman of the ruling APC, Adams Oshiomhole was once asked to tell the body language of the president, when he informed him of the plots to remove him and the court order that suspended him, he said he could not for a fact read the mind of the president on the issue.

Though it is difficult to read the mind’s construction in the face of any individual, at times, it is better to predict one and say this is the way things may go. To allow crisis fester and almost getting out of hands before intervening does not show leadership.

It was at the National Executive Committee (NEC) meeting of the APC that the leadership crisis came to the forefront. In fact, it was noted that combatants against Oshiomhole were ready to move against him, but the sudden exit of the President from the meeting and subsequent adjournment of the NEC meeting saved an impeachment move against the embattled National Chairman of APC.

It cannot be said, therefore, that with the avalanche of security reports available to him, President Buhari was not aware of the crisis within the APC, the political party that brought him to power. Many had argued that if the President had intervened at that material time, the crisis would not have dragged to the extent that the integrity of the Court of Appeal was messed up as a result.

The full plot to remove Oshiomhole took root, when he was suspended at his ward in Edo State. The chairman of the Edo State branch of the APC, Anselm Ojezua, had in 2019, stated that the suspension of Oshiomhole was based on President Buhari’s admonition that any member, who was not relevant in his ward, local government area and state could not hold office at the national level.
He said the Edo APC had concluded that Oshiomhole lacked the capacity, temperament and moral authority to lead the APC as national chairman. Ojezua insisted that any action taken by Oshiomhole in the capacity of national chairman, including documents signed and meetings presided over by him might be futile as his membership was already compromised.

This was where the President or even his media handlers would have intervened, warning against dragging the name of the president to minor political issues that were purely local. The silence by the President on this was an added impetus for the crisis to get out of time.
Then, the crisis moved to the judiciary, because as it is known in Nigeria, any political matter without a legal dimension is yet to start.
Justice Danlami Senchi of the Federal Capital Territory High Court, on March 4, granted an order of interim injunction stopping Oshiomhole from parading himself as the national chairman of the APC.

The judge, while granting the injunction held that political parties must be bound by their constitution, and having been suspended by his ward, Oshiomhole was restrained from functioning as the national chairman of the party pending the hearing and determination of the substantive suit. The judge consequently fixed hearing of the matter for April 7 and 8.
As expected and instead of going to appeal, the embattled Oshiomhole, moved to a Federal High Court in Kano, where he got an interim order halting his suspension as the chairman of the ruling party.

Oshiomhole declared that the Federal Capital Territory (FCT) High Court, which restrained him from further parading himself as the national chairman of the APC on Wednesday had no jurisdiction to entertain the suit.
This was part of debasing the judiciary by politicians, who ought to know better. But the outcry by Nigerians that a court of concurrent powers couldn’t counter his suspension order, Oshiomhole proceeded to a higher court, the Court of Appeal. In all these ensuring dramas, the President and his handlers kept quiet.

Coming back to his senses, Oshiomhole approached the appeal court to challenge his suspension as the chairman of the party by the High Court of the Federal Capital Territory. In his appeal, he asked the Court of Appeal to set aside the suspension order of Justice Senchi and restore his position as APC national chairman.

The appeal, which was earlier slated for hearing was, however, stood down till evening, following an announcement by a three-man panel of justices of the court headed by Justice Steven Adah that another panel would handle the matter.

But what happened in between when the appellant court announced adjournment and the time it forced to come out?
Shockingly, in the eleventh hour, President Buhari approved the postponement of the NEC, when he met with APC governors, including those of Borno, Lagos, Ogun, Edo, Kebbi, Jigawa, Kwara, Nasarawa, Niger, Plateau, Ondo, Kano, Osun, Katsina Imo and Gombe States in his office.

At the end of the meeting, the chairman of the Progressive Governors Forum and Governor of Kebbi State, Atiku Bagudu, told reporters that the NEC meeting would hold when the governors were able to resolve the existing disagreement.

“We told the president that the governors had resolved to work together to resolve all the issues in the party. Also, we seek Mr. President’s support to postpone the NEC meeting that is scheduled for tomorrow (today) until such a time that the governors are ready to report back,” Bagudu said, adding that the president was “so happy that we all agreed to that.” The big question remains, why wait for a minor crisis to degenerate to a complete mess before intervening?