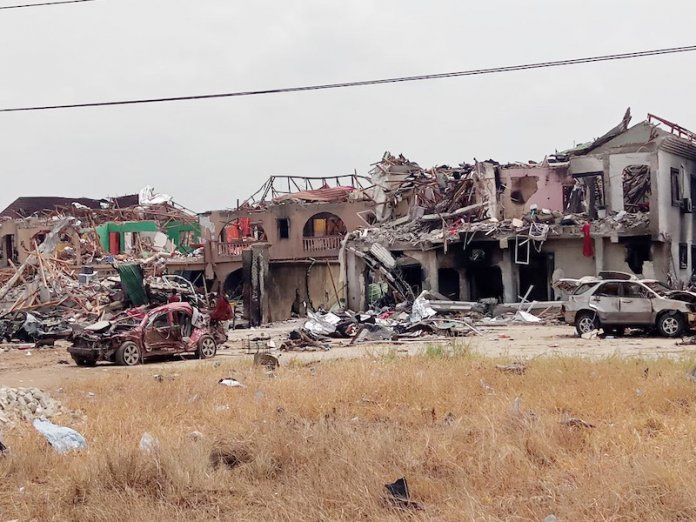 Charles Ajunwa writes that last Sunday’s explosion in Abule Ado community in Lagos which left behind destruction and deaths, shattered the dreams of many

Residents of Abule Ado, a suburb of Lagos State, woke up last Sunday morning not knowing that danger was lurking around the corner. Many families left early to worship in different churches while others embarked on different activities. Commuters were also on the ever-busy roads heading to different destinations. But all these changed suddenly when a deadly explosion occurred. The sound of the blast was heard several miles away from the scene. Within seconds of the explosion, residential quarters, schools, hotels and other business areas were shattered by the force of heavy explosion. At the last count, 20 bodies had been recovered from the scene of the explosion. The injured were rushed to hospitals by the first responders to receive proper treatment.

This reporter that fateful Sunday morning, was at the Redeemed Christian Church of God, Restoration Parish, Area 25, Province 64, Ejigbo, participating in the Sunday School class. Around 9:15a.m., we heard a big bang that shook the two-story building we were worshipping in. Information later filtered in that there was a massive explosion in Abule Ado. It was a black Sunday! I was very curious to find out what really caused the deadly explosion.

The probable cause set tongues wagging with conspiracy theories flying around. On Tuesday, after saying my morning prayer, I set out for Abule Ado for on the spot assessment. From Cele Bus Stop, I boarded a bus to Mile 2. Within a few minutes we were at Mile 2. I boarded another bus going to Abule Ado. When I disembarked at the bus stop along the Badagry Expressway, I noticed that commuters and roadside traders were moving about as if nothing happened. One of the Okada riders I asked to take me to the explosion site, told me the police stationed along the Otunba Gani Adams Road leading to the explosion site denied them access. But I persuaded one to take me to the place. Shortly after I mounted the Okada, the Okada man said “Oga journalist, fresh fire ignited there this morning. We even hear that over 100 bodies were recovered from the explosion site.” Less than 60 seconds into the ride, the damage by the explosion became evident. Rubbles from impacted houses very far from the actual explosion site began to be noticeable in the horizon and on both sides of the road.

Sighting a heavy presence of the police, Lagos State Emergency Management Agency (LASEMA), Lagos State Neighbourhood Safety Corps (LSNSC), Nigeria Red Cross Society, Federal Fire Service and other plain clothe security personnel, I told the Okada man to stop a few metres from the barricaded zone. Many people who came to see first-hand, the massive devastation caused by the explosion clustered around discussing it in low voices. I approached one of the police officers standing in the barricaded zone and identified myself as a journalist. After clearing me to access the site, the officer chipped in “Please be careful, your life is more important.” I told him I would and proceeded straight to the site.

The whole place was desolate. The destruction was massive and unbelievable. I gathered that over 300 residents have vacated the area.

On the left side of the road, I saw what looked like a mechanic village completely reduced to rubbles. Parked vehicles were burnt beyond recognition and nearby houses shattered. What used to be a hotel was badly destroyed. A few metres away is the Bethlehem Girls College, which was not spared by the inferno. The roofs of the school were blown off and parts of the structure ripped apart. I gathered that about five staff of the school died including the Principal, Rev. Sister Henrietta Alokha.

On the right side of the road, I saw workers of the Nigerian National Petroleum Corporation (NNPC) excavating the ground where the explosion occurred. On the ground also were officers of the Federal Fire Service who parked two of their trucks very close to the excavation area. Nobody was allowed to come near to the main excavation site. A burnt tanker was parked on the explosion point, which many said ignited the fire.

Structures along the pipeline right of way and others located very far were ripped apart by the ravaging inferno. Roof tops were forcefully blown off, walls, windows, and doors damaged beyond repairs. Debris of burnt and mangled vehicles also littered the whole place.

Controller General of Federal Fire Service, Dr. Ibrahim Alhaji Liman, while addressing journalists on Tuesday during an on the spot assessment of Abule Ado explosion, gave insight to the possible cause of the large scale destruction.

“I’m here to have the on the spot assessment of what happened. And you will see with me top management of the Federal Fire Service from Abuja, Director Lagos State Fire Service, the Commanding Officer of Federal Fire Service, and the DG Lagos State Emergency Management Agency. I have had discussions with them, I have inspected the site and the governor has set up a committee to investigate what actually happened and Fire Service is one of the members of that committee. From day one, we have started gathering our information which by the time the committee sits we will present our findings.

“Now, I don’t want to preempt what the committee is going to come up with but what happened is very unfortunate. I saw petrol on the ground still and the NNPC people are here to take control of that one. Two, I have seen the massive destruction of properties. Also, I was told up to 20 lives were lost. Now, you want me to talk about the cause of the fire, it’s too early for me to tell you the cause of this fire because there are so many stakeholders, so many factors to be considered before we arrive at the supposed cause of that fire. Whatever anybody has said before now as the cause of the fire is his personal opinion. We are professionals in this line and we work with other stakeholders, Lagos State Emergency Management Agency, the NNPC, and the police, we will work together to arrive at what is the supposed cause of the explosion,” he said.

On how to avert future occurences as buildings have been built on the right of way of gas pipeline, Liman said: “The government has to come in here because from what I’m seeing people have abused the master plan, Lagos State and the government has to take necessary action to either relocate these people or revoke whatever authority they have to own those properties. And in future also they should monitor physical development especially structural development in Lagos to make sure people abide by rules not to violate the master plan of the state. Not only Lagos, but this also cuts across the 36 states and FCT. Other governments should learn from what we have seen here so that people will not abuse the master plan and where this is found they should please immediately dismantle such structures.”

Speaking on the challenges faced by his men last Sunday, the fire service boss said “The only challenge we have which is mainly major problem to fire service is crowd control because the crowd didn’t allow us to do our work effectively. Everybody is anxious, they want the fire to go off within 10 minutes, 15 minutes struggling with our equipment. But thank God the police came and Lagos State Emergency Management Agency they were able to put the crowd under control and that gave us free hand to carry out our operational duty.”

On the allegation that there was not enough water to put off the fire, Liman said: “Well, I didn’t receive that report from my men. We had about 20 fire trucks and water tankers and each of those trucks were taking 6,000 litres of water and 500 litres of chemical to fight the fire and the tankers were taking 10,000 litres of water capacity. I think the major challenge my men experienced on Sunday was crowd control but thank God for the police and other security agencies and the Lagos State Emergency Management were able to arrest such situation.”

Lagos State Governor, Mr. Babajide Sanwo-Olu, who described the Abule Ado explosion as a war sight directed the release of N200 million to cushion the effects of the explosion to the affected people. He also announced a N2 billion emergency relief fund for the victims, calling on corporate entities to contribute to the emergency relief fund.

On his part, President Muhammadu Buhari described the Abule Ado explosion as a national disaster. “I have received with sadness the news of this unfortunate incident, which caused loss of lives and property. A misfortune of whatever scale anywhere is a tragedy to the country, and while the NNPC makes efforts to determine the cause of the incident, I send my deepest and profound sympathies to the victims, their families, government and people of Lagos State.”