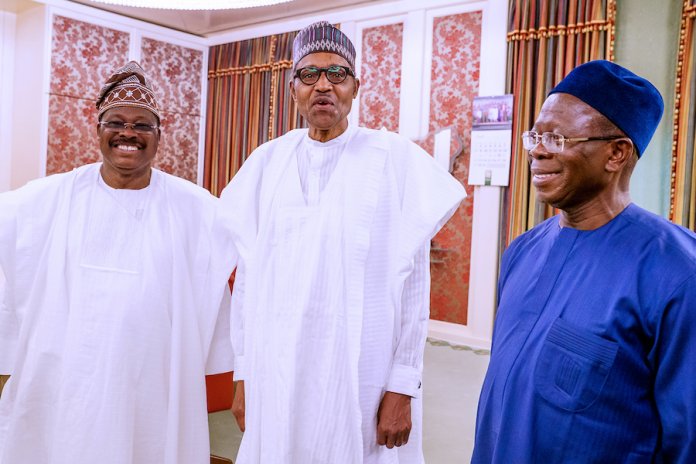 The embattled National Chairman of the All Progressives Congress (APC), Adams Oshiomhole, yesterday in Abuja presented a former governor of Oyo State, Senator Abiola Ajimobi, to President Muhammadu Buhari, as the newly appointed Deputy National Chairman (South) of the party.

Ajimobi was appointed by the South-west caucus of the party, to fill the vacant position created by the appointment of a former governor of Ekiti State, Otunba Adeniyi Adebayo, as the Minister of Industry, Trade and Investment by the president.

Briefing journalists in the State House, after presenting Ajimobi to the president, Oshiomhole said the former governor was not a strange face to the president having played notable roles at the pioneering stages of the party.

He said the president was glad to have him coming on board of the party leadership of the party with a wealth of experience as a former governor, senator and oil worker.

“I came essentially to present the former governor of Oyo State, Abiola Ajimobi, whom the South-west has nominated to fill the void arising from the vacancy of the Deputy National Chairman, South, created by the appointment of the Minister of Industry, Trade and Investment.

“Of course, Mr. President already knows him. He hosted us a couple of times when he was governor of Oyo State and played a pioneering role in the formation of the All Progressives Congress (APC). Obviously, he is not a stranger to the president. It’s just a way of formality that I have to present him.

“Mr. President was delighted about someone with his background – a complete gentleman. He has been in the oil industry, a senator and a two-term governor. So, he will bring on board a wealth of experience that will help to reinforce the quality of leadership of the All Progressives Congress,” he said.

Reacting to the rejection of Ajimobi by the Ekiti State of the party, Oshiomhole said Ajimobi was chosen by the South-west caucus of the party and if only one of the six states of the zone objected to it, it is a common reflection of the popular axiom that the minority will only have their say whole the majority will have their way.

“We are in a democracy. We have six states in the South-west, and this position is zoned to the South-west. The South-west had met, and there were five states in support and one state (Ekiti) opposing both at governorship level and at the party’s structural level.

“The name of the game is like the Ekiti State chairman has said, ’minority will have their say’ and he has enjoyed that right to have his say, but he can’t prevent the majority from having their way. I think that is it,” he said.

Oshiomhole also commended Buhari for reducing the pump price of petrol from N145 to N125, describing it as a good gesture.