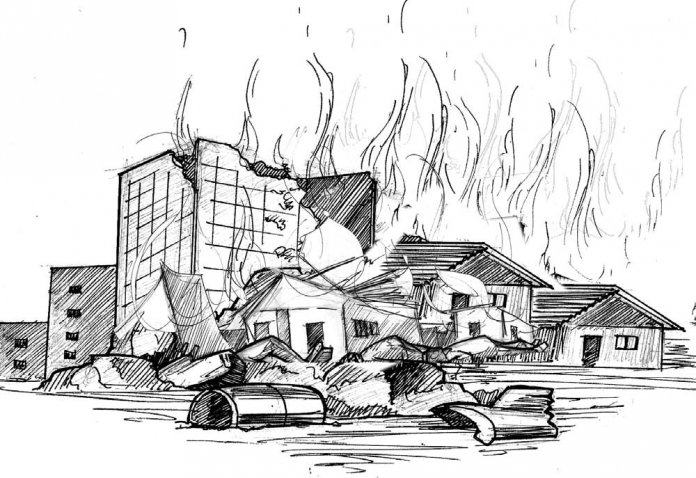 The nation witnessed yet another carnage on 30th January 2020 when the popular Balogun Market in Lagos State went up in flames. The inferno occurred barely four days after the Amu Plank Market in Mushin, also in Lagos State, was razed and two months after a similar fire incident had killed a policeman in the same market. The latest fire outbreak reportedly began when a trader was putting fuel into an already powered generator, resulting in an explosion which killed the trader on the spot. The inferno lasted for more than seven hours and left in its wake wanton destruction of goods and property.

From Lagos to Onitsha, Kano and Port Harcourt, hardly any day comes without a report of fire disaster at a market, in some offices or homes. These frequent fire outbreaks and the attendant losses without any decisive move to halt the trend are worrying. More disheartening is that no lesson seems to be learnt from these incidents since no mechanism has been put in place to forestall reoccurrence. Without a sense of collective responsibility, many are left to bear their tragedies in silence.

Some of the recent incidents include the fire outbreak at the office of the Independent National Electoral Commission (INEC) in Ogidi, Anambra State on 2nd February. The fire was reportedly caused by bush burning. Late last year, a six-storey building loaded with goods at Oluwole Market and another three-storey building on Dosunmu Street on Lagos Island were razed on the same day. On 20th November last year, a shopping mall in the Surulere area of the state was gutted by fire, while a nylon factory on Clem Road, Ijaye, also in Lagos was on fire barely two days after the latest Balogun Market incident. In the same vein, memory of the two shocking Kano market fire incidents on 7th February and 14th April 2019 which razed over 70 and 35 shops respectively is still fresh in mind. Besides, the Onitsha fire incident of 15th October last year which claimed the lives of scores of citizens after a fuel tanker lost control and crashed into some buildings won’t be forgotten in a hurry.

We have had more than enough fire tragedies that ought to have warranted the entrenchment of various forms of mechanism by the operators of public and private places to reduce occurrences. But instead, things are getting worse by the day, to the extent that avoidable loss of lives and property to fire outbreaks had more or less become a routine. Most irksome is that some of the incidents culminating in this colossal damage were caused by the careless attitudes of individuals who fail to learn any lesson from similar developments in the past. The Balogun fire tragedy, like some other fire incidents in the past and their attendant losses, was avoidable if only a little sense of caution had been applied.

We therefore call on the federal, state and local governments to come up with sound and effective mechanisms to protect important places, buildings, markets and institutions from fire incidents. We also challenge these various governments to as a matter of urgency, deliberately revamp and mobilise the fire service to perform optimally. Stringent measures should also be put in place to punish any individual or group which carries out any activity resulting in inferno. Until this is done, fire incidents will continue to bring irreparable losses to the society.